The following charts indicate that Labor costs continue to be an issue in the industry. After losing $100M in each segment (Casual Dining & QSR/FC) through the 3QYTD, the industry (of those that have reported to date 2/28/18) has lost $33M cumulatively. We could be on track in the 4Q17 to lose another $50M for the industry, for a $250M negative impact on the industry due to higher labor costs in the FY17.

In the casual dining segment, Texas Roadhouse continues to lead the pack downward with consistently higher labor costs.  Despite having same-store sales among the best in the segment, management is unable, or unwilling to permit, the leverage of labor costs.  They have consistently spent $6-$7M in higher labor for every quarter of 2017.  The 4Q17 was no different.

Darden meanwhile continues to slip, dropping another $6M in the 4Q17 after losing $5.4M cumulatively in the 3Q17YTD.  Cheesecake has experienced a roller coaster ride with the 1Q17 and 3Q17 largely negative with a positive impact in the 2Q17 for a cumulative impact of $9.3M.  The 4Q17 negative impact was $5.2M.

BJ’s Restaurants had a steady decrease in labor costs in 1Q and 2Q of ~$2.5M until the 3Q, when the negative impact of labor costs jumped to $4.5M. But in the 4Q17, they returned to their trend, losing $2.5M in higher labor costs.

Red Robin is most improved as they start to lap last year’s labor woes.  The improvement of 102 bps comes after three quarters of negative, albeit improving labor comparisons.  After losing $10.4M in the 3QYTD, they earned back $3.5M.  It remains to be seen if this improvement can continue given the New Year and the myriad of regulatory changes that accompany it. 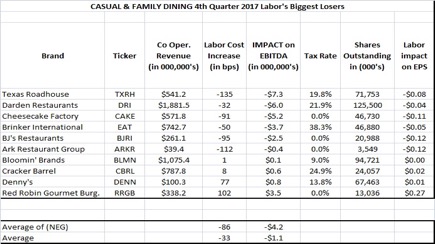 QSR CHANGES DIRECTION FOR THE WORSE

On the QSR side of the restaurant industry, McDonald’s continues to struggle. The first half of 2017 was a toss-up with essentially a nominal gain in labor comparisons.  But the 3Q17 hit them hard with a $46.0M negative impact from higher labor costs.  The 4Q17 was not that much different.  MCD reported a $40.5M negative change in labor costs for the period.

FRGI, Fiesta Restaurant Group (FRGI) continues to struggle with large negative same-store sales and the resulting impact on Labor costs of $2.4M in the 4Q17. Zoe’s also continues its brawl with higher labor costs, tracking a $1M negative impact in each quarter of 2017, including the 4Q17. 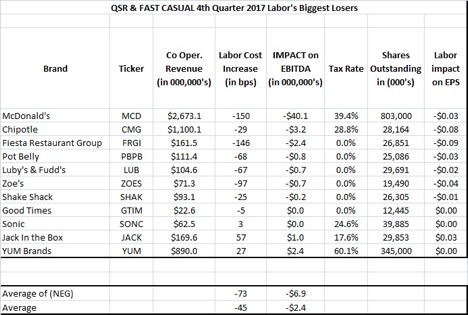 National Retail Concept Partners, LLC is a full-service consultancy based in Denver, CO. working with a variety of industries, including the automotive, retail, restaurant and hospitality industries. Partners Larry DeVries and Dean Haskell wrote the preceding post. These recurring posts can be accessed at their LinkedIn profiles. NRCP recently shared its labor optimization success at the Restaurant Finance Conference. The partners can be reached by email at ldevries@nrcpartners.com and dhaskell@nrcpartners.com. Mr. DeVries is based in Denver, Colorado and Mr. Haskell is based in Nashville, Tennessee.