Labor Redux – 2Q18 IT’S GETTING SCARY OUT THERE!

The following chart indicates that Labor costs continue to be an issue in the industry.  The two segments of our industry have eachlost approximately $230 Million since the beginning of 2017.  Interestingly, QSR has generated those losses with accelerating costs in only the last four quarters, while Casual Dining struggled through the last 6 quarters.  So far this year the industry has lost as much as in the first half of the year, as it did all of last year.

On the QSR side of the restaurant industry, the 2Q18 was only narrowly better than the 1Q18.  Both quarters experienced losses in excess of $70M.  Most of these losses are attributable to McDOnald’s.

On another note, the company with the most improvement in labor costs is the large MCD Master Franchisee in South America, Arcos Dorados.  After three quarters of struggling in 2017, ARCO reported a nominal improvement in the 4Q17.  Strengthening this year, ARCO has reported positive labor comparisons totaling $16M as it takes advantage of strong same-store sales in its core markets.

Chipotle, continues to experience the fallout from its food safety issues, falling same-stores de-leverage operating costs with labor up by $20M so far this year.

Zoe’s Kitchen reported another quarter of significantly higher labor. For nearly six consecutive quarters, Zoe’s has reported more than 100 bps increases in labor costs and has remained near the top with higher quarterly labor costs. However, this will now be CAVA Group’s problem as they announced the acquisition of Zoe’s just ahead of the quarterly announcement.  This duplicates Panera’s exit from the public scene just a year ago. 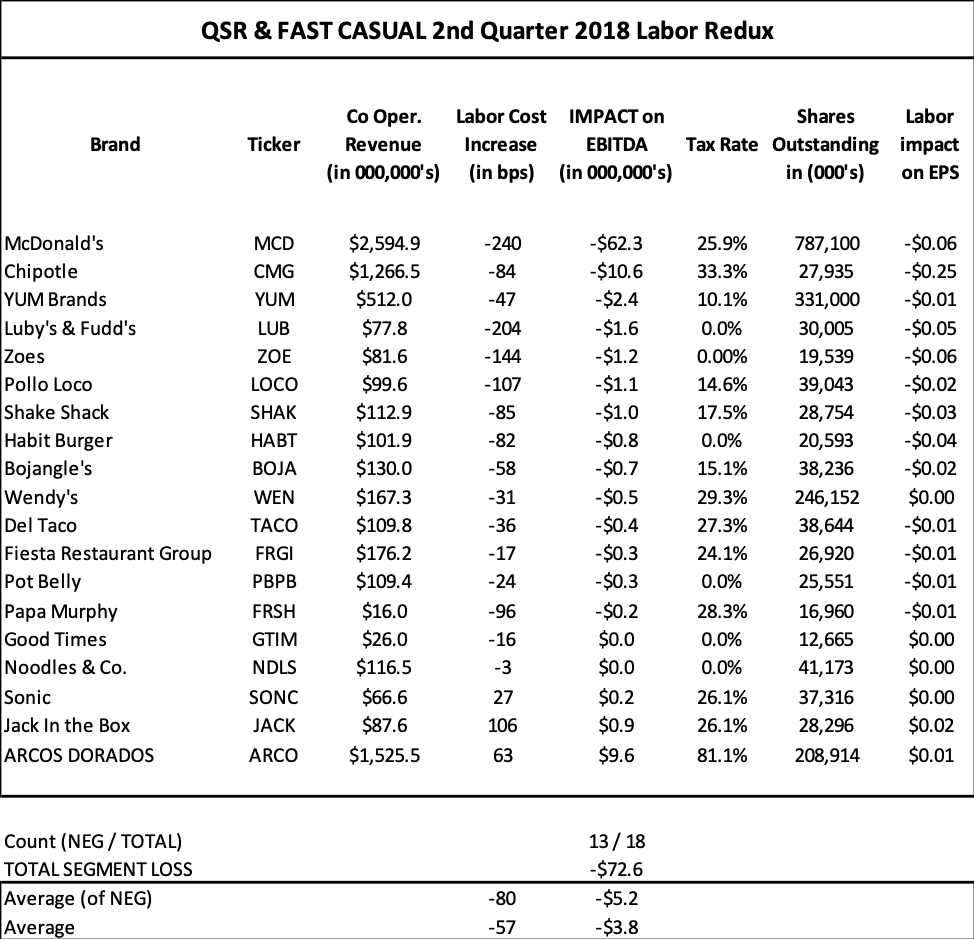 In the casual dining segment, Texas Roadhouse continuous poor showing has been replaced by Darden as their labor woes accelerate.  Through the 2Q18, Darden at $47M in higher labor costs has lost more than 4x the amount lost in 2017.  Meanwhile, TXRH is on track to match last year’s total losses of $28.9Mcontinues to lead the pack downward with consistently higher labor costs.  Despite having same-store sales among the best in the segment, management is unable, or unwilling to permit, the leverage of labor costs.  They have consistently spent $5-$8M in higher labor for every quarter since the beginning of 2017.

Darden meanwhile continues to slip, dropping another $6M in the 4Q17 after losing $5.4M cumulatively in the 3Q17YTD.  Cheesecake’s roller coaster ride of labor has steepened with 2Q18 labor costs accelerating to a $12M negative impact.  The $19M negative impact in 2018 so far is also bigger than last year’s total results.  Chuy’s (CHUY) has reported 80% of the losses they reported last year.  Unfortunately, their labor woes appear to be accelerating with a 260bps in 2Q18 following on the heels of a 150 bps negative comparison in 1Q18

BJ’s Restaurants has had a steady hand on the labor tiller.  After losing ~$2.5M in each quarter last year, this year has seen only nominal increases in labor costs.  Red Robin is likely most improved as they start to lap last year’s labor woes, but has yet to report 2Q18 results.  They reported a 70bps gain in labor costs in the 1Q18.  We would expect an improvement of nearly 50 bps in the 2Q18.  Del Frisco’s DFRG, has had a remarkable comeback in labor costs in 2018.  They have saved $4M so far this year, which represents 2x last year’s entire loss. 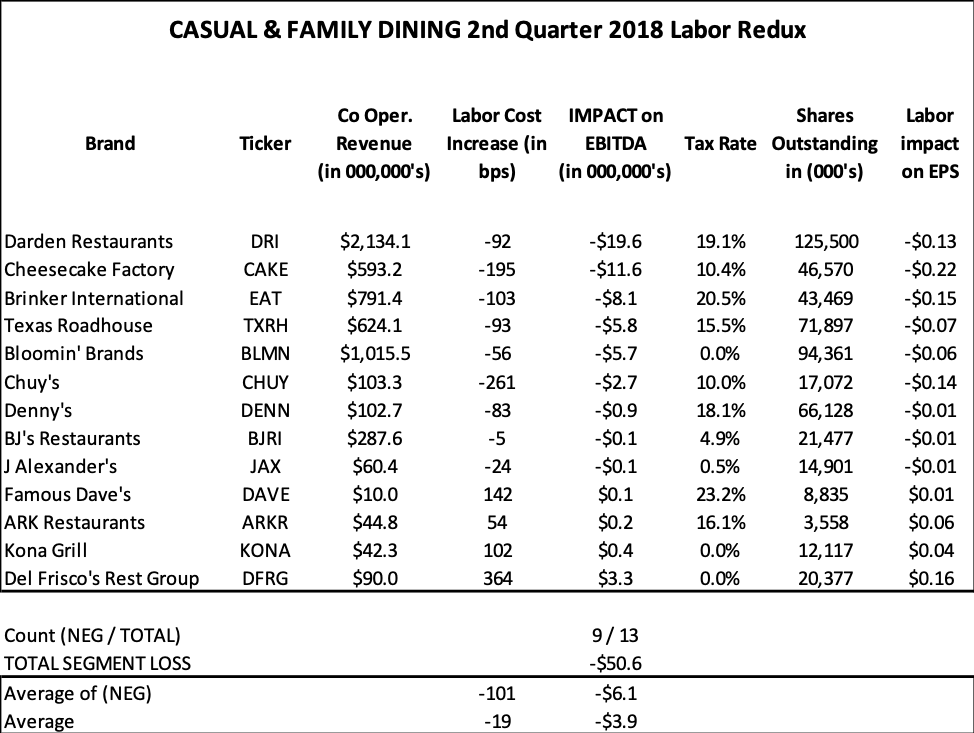