2Q17 Labor’s Biggest Losers – Some Get Better; Others Worse

This blog post is a continuing effort to focus managers, investors and operators on the impact that rising labor costs is having on their profitability.

Well, the early results are in.  In the 2Q17 as of this afternoon’s (August 5, 2017) reporting 22 companies have reported earnings that included a separate line item for labor costs. 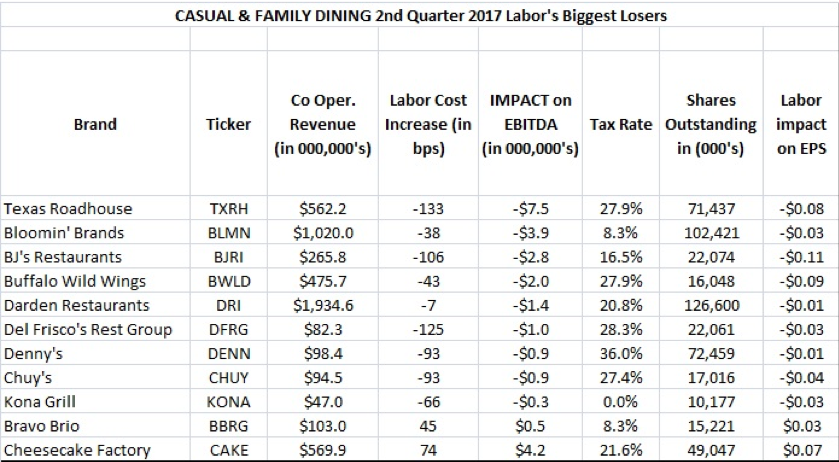 On the Quick Service & Fast Casual side of the industry, the impact of higher labor costs was more muted.  Several companies, Bojangel’s (BOJA) and Shake Shack (SHAK) reported large negative impacts of labor, well over 100 bps; (138) and (179), respectively.  Both companies experienced moderate declines in SSS of just less than 2%.  This result implies that either their operating systems are more highly leveraged than expected, or management kept labor in place and worked hard on sales improvements.

The average impact of those companies reporting negative labor comparisons was 66 bps. Several companies reported mid-double digit declines.  Overall, the segment reported a decline of 32 bps, as labor had a positive impact on several companies.  These companies were McDonald’s (MCD), YUM Brands (YUM) and Chipotle (CMG).  This is the second consecutive quarter that CMG had a significant positive impact on EBITDA ($42.8M in 1Q17 and $18.5M in 2Q17) from labor as same-store sales of +8%, continued their positive momentum in the 2Q17. 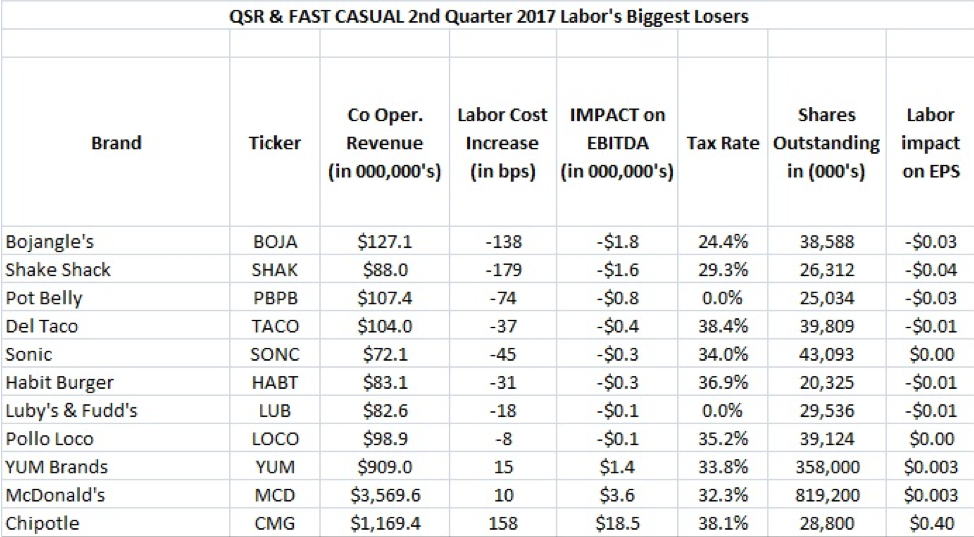 The preceding information is the work of NRCP.  It cannot be copied, or reproduced without the express written consent of NRCP.

National Retail Concept Partners, LLC is a full-service consultancy based in Denver, CO. working with a variety of industries, including the automotive, retail, restaurant and hospitality industries.  Their website is www.nrcpartners.com.

Partners Larry DeVries and Dean Haskell wrote the preceding post.  These recurring posts can be accessed at their LinkedIn profiles.  NRCP recently shared its labor optimization success at the Restaurant Finance Conference.  The partners can be reached by email at ldevries@nrcpartners.comanddhaskell@nrcpartners.com.  Mr. DeVries is based in Denver, Colorado and Mr. Haskell is based in Nashville, Tennessee.